The history of Lakeside, Arizona, is inextricably linked with that of Pinetop, although until 1984 they were separate areas legally and historically. Many residents, as well as the U.S. Post Office, still consider them distinctly separate communities. 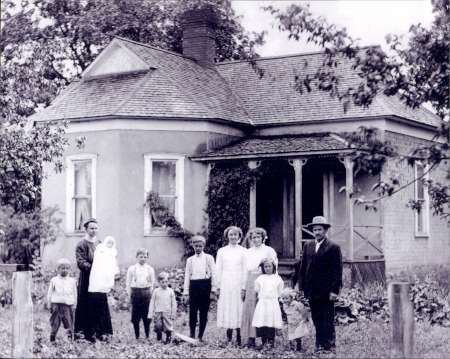 By the mid-1880s, there were few settlers in this area, primarily comprised of six Latter Day Saints (Mormon) families. Around 1884, Hans Hansen, Sr., a native of Denmark, was called by the church to represent the area as bishop of the Show Low ward. At that time, the ward extended from Fort Apache to Linden and Adair (Fools’ Hollow). In 1891, Bishop Hansen’s home burned and he relocated from the Show Low area to Warren Ranch in Pinetop. In 1893, he bought a squatter’s right to a small log house in Woodland, for which he paid twenty head of cattle.

In addition to the bishop, Woodland was also home to the Stock family, Albert Crandall (father to the first child born in Woodland), Alex McCleve, John Marvin, AI Young, Ezra West, and a Spanish family who appeared wealthy.

Hansen, a mason bricklayer, and his son, Hans Hansen, Jr., worked in the building trade. Hans, Jr. did the rock work at Fort Apache, and built many of the first houses in White River and two-story brick houses in the area.

Billy Scorse, the only permanent resident of Lakeside before the Mormons moved to the area, operated the only store in Lakeside, and is the namesake of Billy Creek. Scorse also grew hay, but seems to have sold liquor to the troublesome Fort Apache soldiers as his primary source of income. He owned the Last Chance Saloon and 40 acres on the creek along with squatter’s rights to in-town land.

In the 1890s, development of farms and orchards are historically noted, along with legal disputes concerning water rights. This also was the approximate time of the emergence of formal schooling, which until then had be held in family homes, woodsheds, and root houses. A school district was formed in 1896, which provided classes only two to five months a year.

During the 1903 to 1904 season, except for Adair Spring and Pinetop, the mountain’s fresh water sources dried up and residents were forced to haul water from there. This was followed by the wettest year seen, and likely contributed to the decision to build a reservoir in 1904. Niels Hansen was tasked with surveying Show Low Creek and choosing locations for dams and irrigation ditches. According to stories of that time, Hansen, using homemade tools, built the first dam on Rainbow Lake.

1905 heralded in a substantial decline in the sheep, and many of the local sheep farmers were forced to sell out. Niels Hansen, Hans’s younger brother, bought the Will Amos sheep ranch along with a house he had earlier built for Amos. In 1906, Niels and his family moved into the Lakeside home.

During this time, the area was covered with innumerable mature trees and a minimum of underbrush. With the arrival of the sawmills, old trees were cut down and new pines sprang up.

The Pinetop-Lakeside area is noted to have maintained this character until the mid-1920s.